Get To Know: Keenan Bell, Power Electronics Engineer at VoltSafe 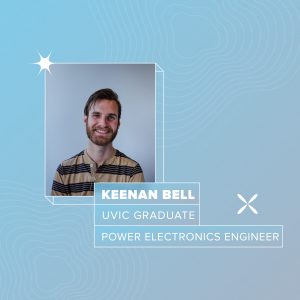 Keenan Bell loves building things. Whether it’s in his backyard creating new items out of old parts sourced from pulling apart old appliances, or in his kitchen putting together ingredients for delicious scones, it’s clear that working with his hands and an inventive mind ‌drew him to a career in power electronics.

He initially began working in the oil and gas fields in northern Alberta after receiving his diploma in instrumentation engineering. Working in that field meant spending his days building gas plants and nights living out of a hotel. He loved the technical work, but didn’t enjoy the lifestyle or the environment. His goal was to build high-tech equipment. So he moved on to a job at a brewery and worked his way onto the maintenance team. He eventually ended up working at an ocean science company where he began building his own equipment. It was there that he discovered he enjoyed working in a lab and inventing things. Power engineering allowed him to be hands on with the equipment.

Choosing VoltSafe as his next co-op experience seemed to be the next obvious move. The technology at VoltSafe was new and innovative and would provide him with the opportunity to build products from scratch. He knew also that with start-up companies, there is a sense of urgency to the work that comes along with trying to bring a product to the market. This made coming into work even more exciting for him.

Since VoltSafe’s technology is so new, there was no documentation or guidelines for the engineering team to follow. So the solution for Keenan was to build his own power metering evaluation board to measure varying current and voltage loads.

He felt safe being able to bring his projects and ideas to life at VoltSafe because of the supportive team and work atmosphere. In an office environment that is free of egos and office politics, Keenan found a great mentor and leader in his “partner in power” Shahbaj Dhillon. Shahbaj helped Keenan with his focus and fostered his confidence in sharing ideas and the choices he made with his projects. So finding himself in a place where he could work in a lab on inventions in a supportive environment ‌ultimately led Keenan to join the company as a full-time staff member.

He’s eager to share his ideas and topologies with the company and enjoys that VoltSafe encourages its engineering team to push guidelines and challenge certification boards on certification approval.

Perhaps the most valuable lesson from his time so far with the company is learning to be confident in the choices he is making when proposing an idea. He knows it would not have been possible without the mentorship team taking an interest in his work, asking questions and pushing him to reflect on his choices.

Keenan’s advice for those looking into a co-op experience is to choose a minimum of three companies to learn from and make the experience as broad as possible. This way, you can figure out what you enjoy, which path you want to take, leading to a career in a company that you enjoy being a part of.

We are all lucky to have a brilliant inventor like Keenan join the company. We are also waiting for his scones to show up in the lunchroom.

If you would like to join our team as a co-op, you can follow VoltSafe on LinkedIn or check out our careers page. You can also email your interest to careers@voltsafe.com to learn more.