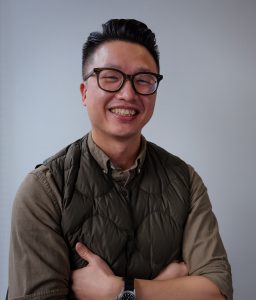 We sat down with Rich Koh, VoltSafe’s Director of Creative & Brand to find out what inspires and drives the brand design genius. When you think of magnetic connectors, the first thing that comes to mind is probably something sitting around in your dad’s toolbox. Rich has managed to showcase how cool VoltSafe’s magnetic connectors and tech are and take a brand that is built on the motto of safe, simple and smart and make it incredibly sexy in that “Cinderella/She’s All That”, kinda way. Read on to learn more about his love of street art and how his journey to the heart of VoltSafe originated with seeing a logo created on a now popular vector drawing program.

Q: What inspired you to pursue a career in graphic design?

RK:  I naturally gravitated towards the arts at an early age.  I really just loved to draw, but it wasn’t until about the age of 11 that I even knew what graphic design was.  Here’s how I found out: I was at a friend’s house and we were building RC cars. His older sister’s boyfriend (at the time) happened to be there and he took interest in what we were doing with the RC cars.  He eventually got a kit of his own and had the idea of creating a racing team.  He then jumped onto the computer and started illustrating a logo for us.  As he clicked away and this logo started to take shape, I just stood there wondering how?  It absolutely blew my mind.  I had never seen anybody create an image on the computer so quickly and precisely.  Now, I’m going to try really hard not to age myself here, but please take into account that those were the early days of Adobe Illustrator.  We’re talking first generation Macs, yah, that beige coloured one with the one button mouse. So what he was doing with the computer was very new at the time.  I asked him what he did for a living and he said he was a graphic designer.  That was pretty much the moment that it was clear to me that it was what I wanted to pursue.

Q:  Is there a designer whose work has inspired you?

RK: There are many, but the first that come to mind are some artists that had a heavy influence on me while attending art school, street artists like Futura, Stash and Shepard Fairey.  Some others were NoPattern and Hydro74.  All these guys had aesthetics that I was really drawn to.  OH, even earlier on, I was always inspired by manga and animé, Katsuhiro Otomo and his work on Akira and Metropolis and of course the whimsical work of Hayao Miyazki and those classic Ghibli films.  More recently I think of James Turrell and his amazing work with light, space and colour.  I’ve also really enjoyed the playful works of Kelli Anderson who demonstrates concepts that are from the tech world and the digital world, but she transforms them into analogue experiences.  It’s super fun.

Q: How did you find your way to the marketing department at VoltSafe?

RK: I had already previously met our CEO, Trevor Burgess through his wife Alex quite a few years ago, maybe in 2013-14? Anyway, I’m a huge fan of the show Dragons’ Den, but when I heard that Trevor was going to be one of the presenters on the show, that was must-see TV for me.  I was so impressed by Trevor and Arash’s pitch and excitedly messaged Alex right after telling her I absolutely believe in what they’re doing.  Soon after, they reached out to me to do some freelance work.  The rest as they say is history.

Q: What has been the most challenging assignment to date ?

RK: I don’t think I can pinpoint it to one exact assignment.  It’s more of an overarching challenge here at VoltSafe.  When you’ve got such a big idea and one that requires mass adoption to truly make a difference in the world, it’s a huge hill to climb.  How we connect and control electricity is a huge deal, yet it’s something that the general public probably doesn’t think about very much.  And so I’m constantly thinking about how we can bring these things to light.  How can we make our creative, our content, our packaging eye-catching enough while also delivering these “big deal” messages in a way that is quick, but also makes sense.  It’s gotta click.  I do think we’re on the right track in building on our brand and we’re constantly improving.  Meanwhile, electrification of the world has really come to the forefront in the past few years and I also think society is becoming more and more aware of the importance of how to use electricity effectively and efficiently.  For a revolution to succeed, sometimes you need the stars to align.  I believe that it’s happening right before our eyes.

Q: What excites you the most about creating marketing assets for VoltSafe?

RK: We’re just getting started here at VoltSafe, so every project counts.  One branding brick at a time, we’re really starting to form the foundation of what the brand will be.  Being a part of this growth and seeing everything come to life is not only extremely exciting, it’s also an incredible opportunity.

Q: Did you have an opportunity to put what you learned over the years to practice here at VoltSafe?

RK: Outside of design fundamentals that I use on a daily basis, I’ve worked at companies as small as 3 employees to companies as large as 1200+ employees.  The lessons I’ve learned, especially with process, have been invaluable.  As VoltSafe grows, we’re constantly having to adapt our process.  I also want to say that the people I work with here are absolutely extraordinary and so intelligent.  I find myself learning and abundance from them, I only hope to pay it forward.

Q: Share the most enjoyable, interesting or funny instance you experienced here at VoltSafe?

RK: Anytime we see an old photo emerge from our CEO’s modelling days, it’s not only inspiring, but a good time.

Q: Do you have a design philosophy?

RK: Good design has a good rhythm to it.  I’ve always thought that a graphic designer’s job is akin to what a music producer does.  Sometimes you have to be inspired by what already exists out there and put your own spin on it and other times you can take two or more samples and blend them together.  It’s a feeling out process and when all the elements come together in a cohesive and beautiful way, it’s like music for the eyes.

Q: Is there a certain aspect of graphic design that you enjoy the most?

RK: For me, all the intense and hard work of building a campaign is during the concept stage.  Once that’s all sorted out and we’ve landed at a spot where we’re all happy with how things are looking and feeling, it’s almost like a eureka type of moment, that’s a great feeling.  From there, it’s mostly execution and hopefully starts to feel like you’re on cruise control.

Q:  What advice do you have for up and coming graphic designers?

The other part about taking risks, what I mean is not to be afraid of failure. Fail big!  Whether it’s something new you want to try or if it’s a big client you want to land.  Go for it!  The more you’re exposed to those big and scary situations, the closer you’ll get to those big dreams.

Q:  A startup company demands a lot of hard work and extra hours beyond the traditional 9 to 5 job…. When you’re not busy working on VoltSafe tasks, what do you like to do in your spare time?

RK: I have two boys. One is eight and the other is four.  Yup, that’s my answer.  Okay okay, when I do have the chance at some me-time, I’d have to say sports are a big part of my life, both watching and participating.  Basketball, badminton and volleyball are what I like to play the most.

As you can see, Rich’s life is full of action and he is constantly on the go. Between running around chasing his kids and shooting hoops, we are in awe of how he finds the time to create and design as well. We are amazed by his ability to take what some may see as another extension cord and showcase the extraordinary capabilities of the technology behind the VoltSafe Winter Block Heater Plug in such a cool way. If you would like to see Rich’s work with VoltSafe, all you have to do is look at the packaging and materials for the VoltSafe Winter Block Heater Plug designed by Rich himself. You can agree that what’s contained in that package is no ordinary extension cord. If you would like to order one for yourself, simply visit our products page.