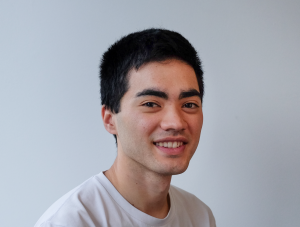 When Adam Beckie isn’t busy at his desk at VoltSafe, in his role as a Hardware Engineering Co-Op, he can be found in an open field in a park around Vancouver chasing after a frisbee with his Ultimate teammates. Chief “Barketing” Officer and VoltSafe pup, Derby Breker, is still waiting for her invitation to join Adam’s Ultimate Frisbee team. But Derby’s playing style on the field is like that of a flanker for a rugby team, while what Adam likes about his ultimate teammates is that although they are competitive, they are quite chill. “Chill” is how he would describe his colleagues and the environment at VoltSafe. It’s one thing he appreciates about the office culture here. There is a trust and confidence that is placed on the skills that the employees bring to their role. That allows for autonomy and independence in the workplace, knowing that support is always available should you need it.

Adam feels that this environment allowed him to learn and grow in a way that he hadn’t with previous co-op experiences. Most of his work previously was in research and development and his work at VoltSafe has been hands-on and while he knows his mentors are available when he runs into problems, he feels that ownership of his work has allowed him the freedom to tackle problems his way. For example, he finds the best method to solve a problem is to break it down to small steps and seek the solution to each step. He wouldn’t have been able to achieve this in a micromanaged environment.

Aside from ownership of his work, the other thing that appealed to Adam about working at VoltSafe was the vision of the company. He liked the idea of working toward something bigger than himself and the fact that the technology would not only have a major impact environmentally but socially as well. After interviewing with Sanad Aridah (Chief Technical Officer) and Shahbaj Dhillon (Power Electronics Engineer), Adam was so impressed by their drive he knew that was the leadership he wanted to work under. That, combined with the experience and skills he would ring to the company, would allow him to contribute to moving the company’s vision forward.

The autonomous nature of his role can make most employees feel isolated. However, Adam found that the self-reliance he developed was something that provided him with the satisfaction of making discoveries on his own. As much as he is on his own during the work day, Adam enjoys the camaraderie that takes place during pizza parties and the shenanigans during VoltSafe’s first annual Bocce ball tournament.

His time at VoltSafe will end soon and Adam would say that the most valuable takeaway for him would be the ability to communicate his progress to his colleagues efficiently. He’s learned that they don’t need details and the trust that they have put in him is there.

As he moves on to his next co-op opportunity, Adam’s advice for those looking to apply for a co-op experience is to know what type of environment they want to work in, get a sense of where they are going to end up and the type of work you want. He believes that startups allow for more learning opportunities that create opportunities to grow your skills and career faster than it would with large corporations.

If you would like to work for VoltSafe or take part in our co-op program, check out our career page at voltsafe.com.