That’s A Wrap: VoltSafe Makes a Successful Debut at the Best Defence Conference

VoltSafe’s technology and applications unlock value and safety in the defence sector.

VoltSafe’s Vice President of Partnerships, Phil Garber, and Power Electronics Engineer, Shahbaj Dhillon, arrived at the Best Defence Conference in London Ontario ready to show off VoltSafe’s technology. Best Defence is the premier conference designed for experts within the Canadian defence industry to network and forge partnerships for procurement and technological advancements. It places particular focus on land systems and cybersecurity. 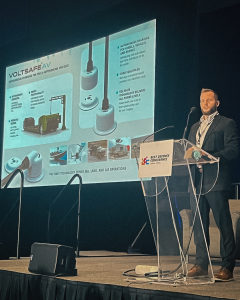 So, how does VoltSafe’s technology fit into the defence sector?  VoltSafe connectors act an electricity gateway for electrons (particles charged up with tons of energy), and is able to deliver them safely and autonomously to vehicles whether they’re rolling, floating or flying. Since VoltSafe tech is considered a dual-use application, it can be used in civilian (commercial, consumer) and defence applications. This quickly became clear to the audience in attendance for VoltSafe’s ‘Tech Showcase’ pitch at the conference, which led to several guests making the trip to VoltSafe’s booth on the trade show floor to learn more. While the crowd was fairly small (around 250 attendees), it was very high-calibre. Thanks to event organizer, Heather Pilot, we were able to showcase our tech to the procurement leads for all branches of the Canadian Armed Forces, the Canadian Commander of NORAD, and the Assistant Deputy Minister of Defence, along with all major defence contractors focused on land or autonomous systems. It was easy to tell from the conversations at VoltSafe’s booth that the reception towards our patented tech changed after the Showcase, and interest in our company’s work carried an air of intent and excitement.

The particular application we want to develop in conjunction with the Canadian defence sector is an autonomous charger for ‘uncrewed’ systems such as drones or vehicles. This product has widely been requested from VoltSafe’s existing commercial customers, ranging from Agricultural Technology startups to robotics divisions of trillion-dollar-market-cap companies. So while the main consumers of the product would be commercial users, the development would – hopefully – be funded through the defence sector.

It was definitely a more buttoned up crowd compared to other conferences that we have been to. However, the need for VoltSafe’s technology and apps in these sectors and industries was just as apparent. In fact, Simon Page, Assistant Deputy Minister of Defence – Marine Procurement for Public Services and Procurement Canada, acknowledged how valuable VoltSafe’s technology would be in helping power federal fleets such as the Coast Guard, Search and Rescue, Navy, Parks, and others.

To learn more about VoltSafe technology and why we are gaining so much interest among various sectors and industries check out our website.